vCloud networking is often overlooked when considering security best practices. However, networking architecture has a lot of aspects to consider. By creating Internal Organization Networks (ION), External Organization Networks (EON), vApp Networks, and Demilitarized Zones (DMZ) this enables the administrator to separate servers based on role or application. By using a mix of both ION’s, EON’s, vApp networks, and DMZ’s enables a network design that allows for the most secure and logical network by separating server roles and applications.

Figure 1 illustrates the combination of all three of these networks. Limiting the amount of connections externally to the internet and using the vShield or third party firewall reduces your visible footprint to outside networks.

Utilizing DMZ’s in combination with the vShield Load Balancing allows the Administrator to create secure DMZ networks while removing exposure to other VM’s or resources. 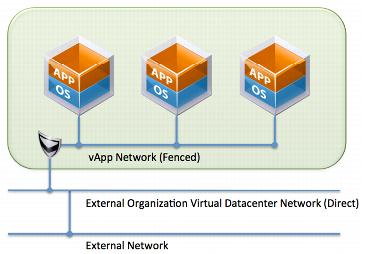 The ION is sometimes referred to as a Data Center connect network or a Private Network. The role of this network is to connect multiple Data Centers, vApps, and VM’s. This network has no external connectivity.

ION’s are most commonly used for:

The EON functions exactly like the ION.  The difference is the EON network is connected to External Provider Network (EPN) or better known as your internet connection. The EON still allows for connection directly to VM’s, vApp’s, or Data Centers.

A DMZ (demilitarized zone) is a generic term for a subnetwork that contains and exposes an organization’s external services to a larger untrusted network, usually the Internet. The purpose of a DMZ is to add an additional layer of security to an organization’s Local Area Network (LAN); an external attacker only has access to equipment in the DMZ, rather than any other part of the network. (Source VMware)

The Firewall is one of the most critical components of the DCS infrastructure in regards to security. It is recommended to use the vShield Edge firewall included inside of DCS or to use a third-party firewall like Fortigate, Checkpoint, Barracuda, or Juniper are just some of the firewalls that are currently in use. Regardless of the firewall selected it is important that a firewall is installed, activated, and configured correctly.

The Firewall supports rules based on IP address and Port ranges for inspection of TCP, UDP, and ICMP traffic.  These firewall rules can be assigned to a specific IP or Port or ranges of IP’s and Ports. 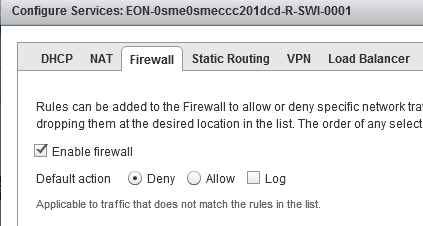 controls traffic originating from within DCS.

DNAT Rules controls traffic originating from outside of DCS.  You should perform DNAT configurations cautiously as poorly configured DNAT rules could allow unsolicited traffic from outside the network to inside.

The IPsec VPN service included with the vShield Edge provides a secure VPN tunnel between other vShield Gateways in the same organization, across several organizations, or third party VPN gateways.

Transforming into an Open Business

How to install and configure CoreOS inside VMware

How to convert your website to SSL for Free